I don’t know about you, but I don’t have sixty large lying around to flush down the toilet either. I’m in the business of helping digital agency owners get more clients, earn more money, and achieve freedom in their business and life.

Most of the time this means that I hold up a mirror and reflect back what my clients tell me. You see, I’m outside the bottle, and you’re inside. Reading the label from inside the bottle is tough. That’s where I come in. 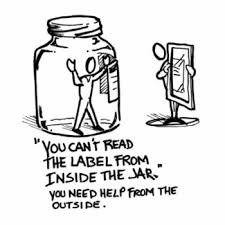 This one client I was working with for about a year, let’s call him Jake, found himself in a situation where the demand for his business was outstripping his supply. He had gotten to the point that the number of projects and clients he was taking on was overwhelming. Up until this point he had relied on about a half-dozen part-time contractors.

It had become clear that Jake needed his first full-time employee to work forty hours every week. Someone that was one hundred percent dedicated to his company and not juggling a handful of jobs. He was tired of getting fit into the whims of his contractor’s busy schedules and their lack of buy-in to his business.

Jake and I were on our weekly coaching call talking about this issue when the real problem jumped out at both of us. What I saw was pretty straight-forward. He had a full pipeline of work with plenty more demand where that came from. It was time to hire someone. What Jake saw ahead was daunting – a high cost in both money and time to hire. In his head, he was offering a human being a job until the end of time.

I asked why Jake was so scared to hire a full-time employee. That’s when he blurted out the core issue about not having enough money in the bank today to pay this new developer for an entire year.

Before you scoff at this thinking, I’m sure you have plenty of fear-based baggage, so don’t judge. I know I do.

While I’m sure some of this fear of hiring was stemming from just not doing it enough, the part I want to focus on today was the outsized and unfounded fear of imaginary downside – while not fully understanding the upside.

Due to our evolutionary biology roots and hunter-gatherer ancestors, our brains are wired to respond much stronger to fear than acceptance. Fear of loss outstrips pursuit of gains by more than two to one. If you aren’t yet aware of this, try a thought experiment:

Imagine that you are enjoying a day on your back patio reading a book and drinking a glass of wine. Your neighbor peaks over the fence and says:

You’ll likely nod your head and chuckle a bit to yourself while turning the page and taking another sip of Pinot. In a parallel universe, your neighbor peaks over and says:

You’ll likely toss the book, spill the wine, call the police, and run toward the assailant yelling “THIEF!!!!”

That’s our issue with fear of loss. This problem gets even worse when we fail to stop and consider what’s really at stake. Sometimes the emotional reaction to the idea of losing something creates an outsized representation of what is realistic to lose. In my example with my neighbor, it would be easy to see how my reaction to a thief stealing from me might make me forget that I don’t even have two grand sitting at my house.

Once it was clear to me that an irrational fear was the culprit of the paralysis in Jake’s business, we needed to get some facts on the table. My first question was:

“Will you be paying this developer one hundred percent of her annual salary upfront?”

“Good, I’ve never done that before and imagine it would probably not be wise. When will you first be paying this person, how long will they have worked, and how much will you owe?”

I would pay them after they’ve worked for two weeks, they would have put in forty hours, and I’d owe them a touch under $3k all-in with salary and benefits.

“Do you think you’d have any clues after two weeks if they would be working out? What if they weren’t, what would you do?”

Yeah, they should already be doing billable work within a week, so that would be an indicator, and if they weren’t working out, I’d fire them.

“Now we’re getting somewhere. So the downside here is three thousand dollars – and that could even be mitigated with a small amount of billable work within the first two weeks.”

I’d have to fire them if they didn’t work out!

“Ah I see, now that we have identified that the financial risks aren’t that big of a deal, there is an emotional risk of failing and letting someone else down that we’ve uncovered. What feels worse to you – the constant overwhelm you are feeling right now, or the seventy-two hours of pain you would feel having to fire a bad fit?”

The pain right now is worse. I can’t keep doing this.

I think we can all agree that a few thousand dollars are well worth the risk to alleviate the pain of being overwhelmed. The kicker is that it’s still an incomplete picture of the risk and possible reward at hand. Hiring is a risk. The main reason that we as entrepreneurs take on risks is to gain.

As we’ve seen, it’s easy to associate the gain with lack of loss – or removal of fear. This thinking is shortsighted and likely leads to less risk-taking than you should engage in as a digital agency owner.

To get a full picture of the decision at hand, we need to also look at the potential upside outcome from taking a risk. I asked Jake what would happen if this new hire worked out. Specifically, I asked:

“If this hire worked out, and your new hire was billable at a conservative 60% capacity for the first year, how much would you stand to earn? How about after three years?”

About $80,000 net profit in year one. Almost a quarter million dollars by the end of year three.

From a purely financial view, this decision looks something like: 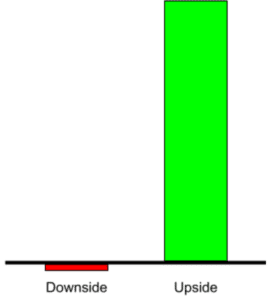 Put into this context, an easy decision to make. The gains of expanding outweigh the loss from a failure to get the right person. The upside is potentially unlimited. As Nassim Nicholas Taleb says, “The sky is the limit.”

Sure, there are scenarios where there is more downside. Like if you can’t keep your team member at 60% billable capacity. Alternatively, they end up suing you for an employment matter. However, let’s assume two things:

I’m going to end this post with an important message to your inner psyche. I think as entrepreneurs, we spend a great deal of our time worried about failure. Since we are all learning from trial and error – and others’ trials and errors – every day, this is natural. We get new information from every failure. This information is valuable data to set up our next trial.

A scientific process of sorts.

The problem is not that we are not taking risks. Every one of us that chooses ourselves as the boss is taking a chance.

The problem is we don’t see the massive potential upside if our risks turn out positive for us.

This blind spot leads to conservative bets on a large variety of risks we engage in versus substantial wagers on fewer risks.

My friend Gary Henderson helped me see this back in 2014 when we did our second launch for our agency accelerator. We wanted to double our enrollments, and he offered to make that happen with Facebook Ads.

I was out in California on vacation when he called me. Standing on the dock in a beautiful Japanese garden looking over the koi pond, he said, “Brent, it’s pretty simple, we’ll need to spend $20,000 in ads the week leading up to your launch.”

I almost fell in the pond.

The most I had ever spent in a month was a thousand dollars. We relied almost exclusively on content and word of mouth. All I could think about was how much money that was. At the time, the only upside I could see was hitting our enrollment goal – which if we did, this astounding budget would take care of itself.

So I pulled the trigger.

What I failed to see though, was the apparent nature of this decision. It wasn’t about this big-budget working on this launch. That wasn’t the real upside. I should have been thinking, “what is the upside for the next five years if we can prove that this new scalable ad channel can work for our business?”

It turns out, the long term upside of this decision made us millions.

So when you face this type of decision in your business, I want you to ask yourself a simple question:

“What if this works?”

Because if you end up getting it right, the upside could be massive. That’s what you should be seeking. It should motivate you to let go of more things to more people in your business. Let them fail. See if they succeed. It should encourage you to take more risks and see them through, not run at the first sign of adversity.

Think in the long term. I know hiring a new employee to grow your business is hard. I know you’re going to put in work. You’re going to trust another human with the future of your business. You’ll trust them with your valuable clients and essential projects. If they screw it up, you might lose.

If you eventually get that seat right, and you can take your hands off the wheel, and they end up working for you for a year, maybe three (or more) – the benefits will far outweigh the cost. Matter of fact, the advantage is so significant that it’s probably worth trying a few times. Spending a few months, even a year, figuring it out.

Start using upside downside thinking in your business. Put yourself to the test.

“What if this works?”