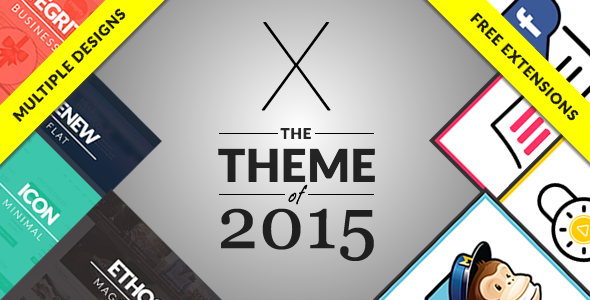 Steve Woody marks the development of his business in revolutions.

First, PHP revolutionized his workflow with “php includes.” Then WordPress entered his life, allowing him to capitalize on a better user interface that allowed customers to update their own sites.

It was at this point in his business that Woody realized he and his clients were spending large amounts of time searching the ThemeForest archives for relevant themes.

As more customization options became available, Woody had a hard time keeping up. “It became overwhelming as a one man developer. I needed a better solution.”

So Many Choices, So Few Options

Woody began searching for something he could use over and over, diving into the world of multi-purpose themes. “I tested Elegant, Yoothemes, Woothemes, and everything in between. I amassed over 10k in themes and plugins.”

As his business pushed him farther into Internet marketing, he found lots of choices in template builders, but was often hindered by limited options within them. “I was a developer, not a designer,” says Woody. “I needed an out of the box solution for my business.”

“Then X Theme came along.”

After implementing X Theme, not only could his customers update their own content, they could now update their entire site or build it from scratch themselves.

“I was making myself redundant. Thank God,” Woody laughs.

The Last Theme You Will Ever Need

Since his discovery of X Theme, Woody has built an education platform called Online Mastery, where he teaches others how to create a successful online presence. Woody has watched X evolve since it’s initial launch. “It’s like having an older brother….It’s a game changer for sure.”

“[My business] is all based on X,” says Woody. “Finally, clients can take control of their online presence. They can learn more than the average web developer in just 30 days and never get ripped off again.”

“I am forever grateful to Kyle and the team [at Themeco].”

“Having X has allowed me to focus on my business and work ON it, not IN it.”

As an example of X Themes results, Woody points to the rebuilding of a partner’s website. “It was ticking over on OptimizePress.”

After rebuilding the entire site in six days using X, the site has taken off with exposure to over one million people. It has experienced constant growth since it’s rebuild.

“We are set to make 20K from the website on the 19th. That’s will be from one webinar in just 90 minutes. This was achieved without a graphic designer. We took native elements to X Themes and one additional plugin to create everything.”

“The hardest part of building a website is the theory. Once you’ve got content, images, etc., you throw it all into X and you’re done. To not need designers, developers, to save the time, if you’re on a budget, it’s a way to get out there.”

Woody says he initially tested X out of curiosity, noticing their excellent marketing and attractive packages. But it was the support that really drew him in.

“I’ve modeled my own business on how [Themeco] treats not only their customers, but everyone. It’s inspiring….Constructive feedback is really critical. That is a really powerful thing. To have a community of like-minded people.”

Noting that support has been his biggest burden, Woody gets all the answers he needs, whether it’s from the X Theme support team or his community of like minded developers.

Woody mentions that he often refers clients to the X Theme forum. “There’s a knowledge base. Chances are, someone else has already had your problem. Rather than dealing with the little tiny things, I can say, ‘set up an account here and you’ll get the answers.’”

Citing the robust forum as a place to give add value to his clients and save himself time, Woody loves the mix of talent offering advice and asking questions.

“What I love about [the forum] is there are veterans in there and really good designers and developers, merged with beginners. People are going there for their own problems, but there are people who go in there and help each other.”